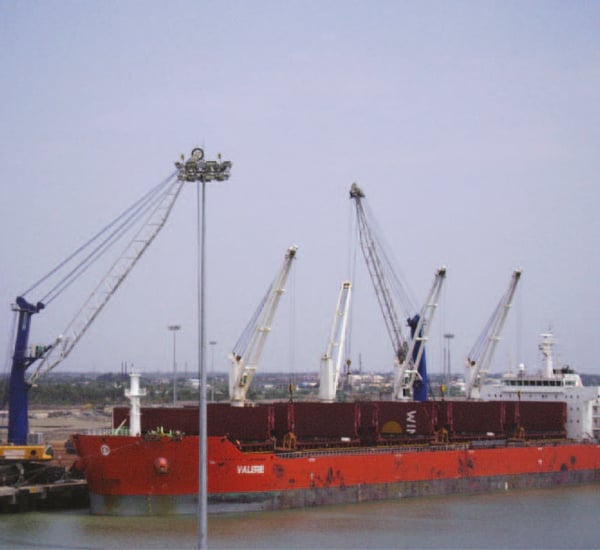 Located on the east coast of India, MARG Karaikal Port is the new gateway to the state of Tamil Nadu in southern India. Located near the town of Karaikal, the port was commissioned in April 2009. Since then the port has handled a range of different cargoes for major industry.

MARG Karaikal Port is equipped with the latest infrastructure that is being augmented in a phased manner. Part of this expansion included an upgrade in late 2014 of the transit lights which were working only during the night. At this time, the day marker was not sufficient for navigating in 11kms of the channel.

Navigation facilities are provided by a fully operational marine control centre to monitor vessel movement. The site is also home to a wide range of associated infrastructure facilities such as administration building, site roads, covered and open storage areas etc which all together create a very busy area that many businesses and people rely on for their livelihood. The port currently hosts three mobile harbour cranes with 35 cbm grabs which are constantly handling all types of bulk cargo and break bulk cargo.

The main beacon provided for the Karaikal Port upgrade was the Vega Range Light (VRL-74).

This solution was chosen from various options during a one month process of close collaboration between Port Pilots, Port Management and Vega. This ensured that it met the needs of the key stakeholders ensuring good visibility in both day and night conditions. This solar and mains powered light provides a 6NM range in daytime and at least 10NM range at night.

The installation provides both a front and rear light 1500m apart, both installed on new towers. The lead lights face due east and is visible both night and day from the end of the11km channel. The background light level used for the day range calculation is 5,000cd per square metre.

The channel width when installed was 160 metres. It has subsequently been increased to 250 metres. Vessels in the channel can view the lights from a height range of between 5m and 50m.

The system was officially commissioned in December 2014 and is now operating seamlessly.

The VRL-74 beacons are visible day and night allowing for safe passage along the 11km channel. It is programmed as a single unit and can operate day only, day and night, or night only.

The intensity of the light can be programmed separately to adjust to different day and night conditions.

Marine Products in this Reference

More references from the same topic